Swerford  is a small village - a hamlet, really, which nevertheless has two distinctive parts, now most often known to its inhabitants as Church End and Chapel End. Church End is, obviously, clustered around the church of St Mary's, while Chapel End, also known as East End, is the end in which the former chapel, now a residential property, is located. In between these two small centres of population, maps show a small area known as 'Between Towns'. (Click on the image below to enlarge in a new window - maximise if necessary.) 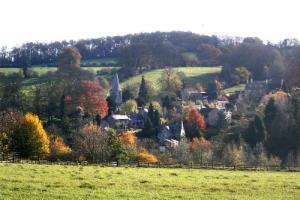 Formerly a primarily agricultural community, with three working farms still operating even late into the twentieth century, it is now a village mainly of retired folk, young professional families working from home or commuting to Oxford and other nearby towns, and a few second homes. One farm still graces our fields.  In the fifty or so houses which comprise the whole of Swerford, there is, in the early part of the twenty-first century, a population of around 100. This compares with 400 or more in the mid nineteenth century, as can be seen from early censuses. People often managed to house many children in these small cottages 150 years ago. The pub within the village is now a residential property, though the one on the main road, the Mason's Arms, still thrives as a restaurant and pub. We have also lost the post office /shop, and the previously mentioned chapel, to homes. The former and once busy school is now also a private residence, bar the part which now forms the village hall.

As its name suggests, the village grew up at a crossing point on the River Swere. This ford is now incorporated in the winding road that leads from the main road through Chapel End towards Hook Norton. From this point, a gated road or track leads off to Wigginton, and, at the side of what used to be the Griffin Pub, a footpath leads back up to the church. As it crosses the stile at the top, it passes in front of Blue Row Cottages.

West of Church End, lie the house and gardens of Swerford Park. This is one of seven historic landscapes, parks and gardens in Cherwell District that have been identified as possessing special historic interest sufficient to be included in the English Heritage Register, the others being the grounds of Broughton Castle, Kirtlington Park, Wroxton Abbey, Middleton Park, Rousham and Yarnton Manor. Swerford Park was built in the early 19th century and its gardens are considered to be of special interest. (Not open to the public.)