There are numerous maps of interest including historic Ordnance Survey maps. This extract is from one in from the early 1900s.  For more information on OS maps, see our links page. 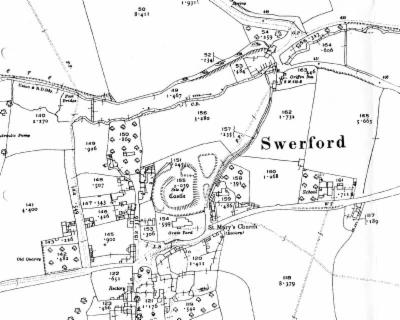 Blue Row Cottages are the cottages to the East of the church, with the (then) common plot of land shown as 486. At some stage, the plot was divided into 4 unequal pieces, one for each cottage, but not, as they are today, a long thin strip for each. Instead, the plot was divided with paths in the form of a cross, so each cottage had a garden running across the frontage of two of them, either immediately in front of the cottages, or beyond. This was changed when they were sold to occupiers in the late 1970s.

The one below is a cleaned up and annotated version of the 1802 Inclosures Map. The red arrow points to the land owned by William Atkins upon which John Powell would build his messuage (which we think is now Old Farm Cottage), and Blue Row Cottages.