Blue Row over the years

Over the course of time a number of artists have been moved to record Blue Row for posterity, Click on the thumbnails to see a larger image, maximise if necessary.

The first two of these, the photographs below, are part of a series of photographs taken by Mr. Frank Packer, photographer, of Chipping Norton, early in the twentieth century, we believe round about 1910 – so almost a hundred years ago. Many of his photographs were given after his death to the Centre for Oxfordshire Studies. To find other photographs of Swerford, or obtain copies, go to  Picture Oxon , a department of the Oxfordshire Country Council, from whom copies of such photographs may be purchased. Enter 'Packer Swerford' in the Search box to see what they hold. . 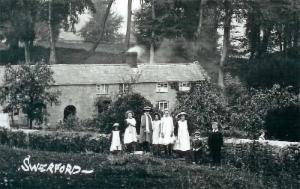 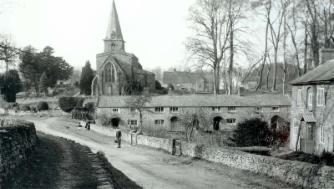 The third, Carolling at Blue Row,  is by Elizabeth Borghero during her naïve period, and shows an imaginary carol singing scene in the garden of number 3. It was painted in 1983 as oils on wood, 28.5cms x 17cms. 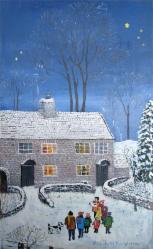 The fourth was painted by Ken Jones, a local artist, in 1991, as a watercolour, 34.5cms x 52cms. He set up his easel on the hillside above, and was shocked by curious cows licking his ear. He jumped up in alarm, spilling his water pot – there are discernible splash marks visible on the original painting! The small figures, a mother and child, walking down the lane beside the cottages are recognisable as local residents at the time with their dog, Meg. 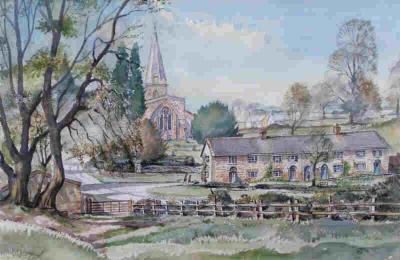